Fagun Thakrar has a diverse career with achievements spanning a wide range of industries and passions. Fagun is a critically acclaimed actor, writer-director, founder, social entrepreneur and global ambassador. The aim in all of her pursuits is to inspire people, improve lives, and help effect positive change across the globe. 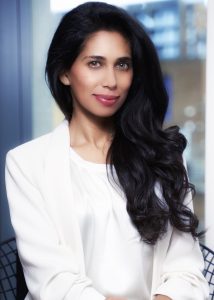 As an actor Fagun has appeared in several Hollywood and international films and has starred alongside Academy Award winners. Her films have been released in cinemas internationally, have been selected in festivals and have won awards. Fagun is particularly drawn to cinematic roles with strong intellectual purpose driven content that communicate a broader social message.

As a writer-director Fagun further explores the power of storytelling through films to create purpose-driven content. Her expertise and passion lie particularly in developing films which shine a light on critical issues and can effect positive change through education and inspiration.

Fagun’s work as a socially conscious entrepreneur has involved founding several businesses, including a fashion brand ‘Fagun Collection’ that debuted at the 2011 Academy Awards. The collection is frequently worn on red carpets for the awards and film festival seasons. A percentage of the proceeds helps to support women’s empowerment programs and victims of domestic abuse.

Fagun is actively involved in local level and global non-profit work with children, girls, women and the health sector. She has worked with organisations such as The United Nations and Amnesty International. She has established herself as a global champion of health and wellbeing, working with people from disadvantaged children to world leaders and national presidents. Fagun is the Global Ambassador and spokesperson for many non-profits around the world, including The Women’s Brain Project.

Building on her experience in this field, Fagun founded her own global non-profit, The Creatively Inspired Life Foundation that is dedicated to empowering young people worldwide to overcome barriers in their educational, professional, and personal lives through using creativity.

Fagun has studied a range of disciplines to Master’s level. Fagun began her education studying Medicine at the University of London Medical School (UCL), an MBA at the University of Cambridge, Master in Fashion at the London College of Fashion. She also trained in Classical and Contemporary Acting at the world-class Royal Central School of Speech and Drama and studied Film Directing in the US.

Fagun has been featured in high-profile publications, and has been listed by Forbes.

Fagun lives and works between the UK and the US. The principal value at the heart of all of her endeavours is to educate, empower and enlighten people to help effect positive change across the globe.